NCERT Solutions for Class 10 Mathematics english medium chapter 3. Pair of Linear Equations in Two Variables is strongly required by cbse students now a days for preparing the board exams. These all materials are fully explained in easy and in importatant points that help the students during reviewing the chapters before cbse board exams. There are so many HOT questions for NCERT Solutions for Class 10th Mathematics english medium that score high than usual. At this page we maintain four important sections like chapter review, ncert books exercise solutions, questions under chapter solutions, Examination based additional important questions with solutions for NCERT Books Mathematics.

Some topics and pages in this chapter

Q1. Solve the following pair of linear equations by the elimination method and the substitution method :

[Note: Here the coefficient of y has been equal and the signs are unlike, therefore these will be added] 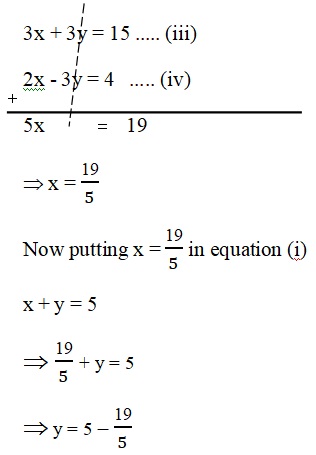 Adding equation (i) and (ii)

Therefore, solution of given pair of linear equation are x = 2 and y = 1

Therefore, solution of given pair of linear equation are x = 2 and y = - 3

Q2. Form the pair of linear equations in the following problems, and find their solutions (if they exist) by the elimination method :

Solution: Let the numerator be x and denominator of fraction be y.

(Note: Here in equation (i) and (ii) has the equal coefficients of y, therefore it need not to equalize them.)

And Sonu’s age be y years

Therefore Nuri’s age is 30 years and Sonu’s age is 10 years.

Solution: Let the unit digit of the required number be x.

And ten’s digit be y.

Subtracting equation(ii) from equation (i) 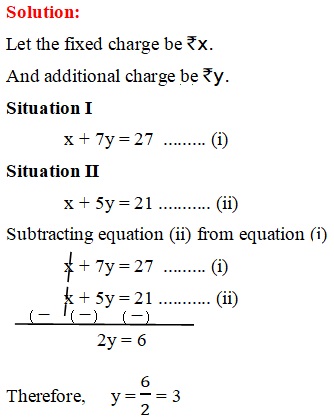 Some topics and pages in this chapter

English grammar is the one of the best subject for students where they learn about noun pronoun adjective adverb conjuction interjection modals tense active and passive voice narration and clauses. latest examination based english grammar topics for cbse examination.

Education is the most important factor for the development of human civilization.